Staff and customers at Harry Gow, working alongside Inverness Rotary Club, have raised £5,000 to aid the fight against polio – with the donation rising to £15,000 thanks to a funding boost from the Bill and Melinda Gates Foundation.

Sales of our special, purple-flowered vanilla cupcakes raised £4,300, with the Rotary Club raising an additional £700. The Bill and Melinda Gates Foundation has matched and doubled the local total, with all proceeds donated to charity Polio Plus, which we have been supporting in association with Inverness Rotary Club.

Managing director David Gow said: “We have been blown away by the generosity of our customers and staff, who purchased our special cupcakes in their thousands. Polio is a very serious disease, and we are proud to have been asked by Inverness Rotary Club to support the effort to eradicate it worldwide.

“Despite everything that everyone is going through in 2020, it has been heart-warming to see Highland residents coming together to get behind such an important cause.” 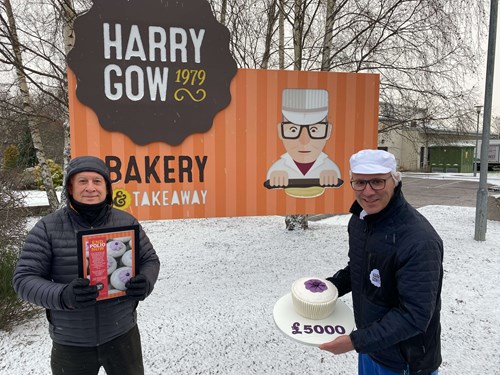 “Harry Gow has a long history of supporting worthwhile causes, and we are incredibly grateful to the team and their customers for their donations.”

Although polio cases have steadily decreased worldwide, the virus still poses a threat. Affecting children under five, one in 200 infections leads to irreversible paralysis. According to the World Health Organisation, failure to eradicate polio could – within a decade – result in as many as 200,000 cases each year across the globe. While there is no cure for polio, vaccinating children can protect them for life.

I have visited the Keith shop several times. Each time I visit I receive friendly service and the food is always spot on. Staff make you feel valued as a customer!

I love Harry Gow bread, especially the oaten loaf. Their cakes are so fresh and tasty, just like and often better than home baking - favourites are the fresh cream jam sponge and the fern cake. Mmmmmmmm. My husband and son love Harry's pies and sausage rolls while I am very partial to his potato scones, soft and scrumptious - just like my mum used to make. It's a family bakery loved by all my family.